Why Every Small Business Needs A Don Draper 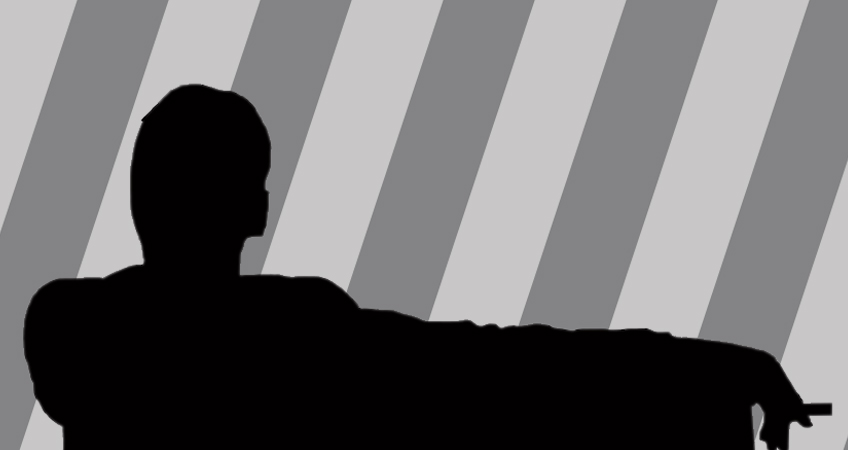 Don Draper was one of the most iconic and intriguing characters in recent television history.

In the AMC series Mad Men, Jon Hamm plays Don Draper, a man who assumes the identify of his dead commanding officer, hustling his way from used-car salesman to one of the greatest creative directors that never lived.

We learn through flashbacks that Don Draper is actually Richard “Dick” Whitman, the son of an alcoholic father and prostitute mother. Raised in a brothel as a pickpocket, now an ad executive pitching Jaguar and Dow Chemical.

Draper definitely had some personality faults that would make him hard to live with or work with. He was a narcissist, a womanizer, and a drunk. There were many times when these traits would interfere with his professional life. But despite all that, he brought tremendous value to his employer and his clients.

Draper was a visionary with a gift for helping companies convey a message that resonated with their audience. He could instinctively create wildly successful advertising that propelled clients to high levels of financial success. He could take a look at a client’s product and instantly understand how to connect it with consumer’s needs and desires.

Here are four reasons why every small business needs a Don Draper.

He Mastered the Art of Reinvention 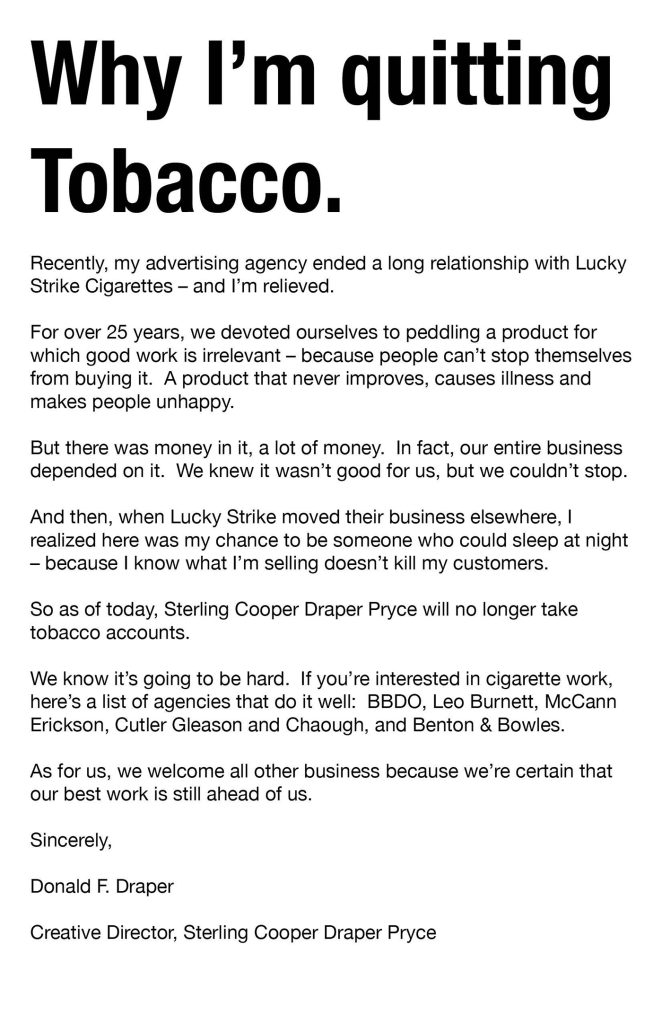 If assuming the identity of your dead commanding officer is not the ultimate rebranding, what is? Maybe this.

At a pivotal point in the series, Don writes a letter that is published as a full-page ad in the New York Times. It states his firm has ended its relationship with the cigarette company Lucky Strike. Furthermore, they will not take on any more tobacco clients for the ethical implications of helping promote a product that causes illness.

This act of rebranding the firm, and himself, without ever changing the logo or names on the wall, becomes a turning point for Don’s life and the agency Sterling Cooper Draper Pryce. Shortly after, the American Cancer Society reaches out to discuss an anti-smoking campaign.

Small and mid-size businesses can reinvent themselves in just as powerful a way at a fraction of the cost.

The perceived value of an entire organization can change overnight with a new logo, website, or ad campaign. It is the prime opportunity to reclaim purpose and authenticity. To evolve the culture.

He Knew How to Differentiate A Brand

Don’s pitch to wholesome swimwear company Jantzen does not go as planned.

After presenting a new ad featuring a model in one of their two-piece bathing suits with a suggestively censored upper torso, the Jantzen executives’ discomfort is palpable. Wanting to maintain a more conservative, family-friendly brand image, they reject the idea.

Don proceeds to give a workshop on differentiating a brand. “Your competitors are going to keep killing you because you’re too scared of the skin that your two-piece was designed to show off. You need to decide what kind of company you want to be- comfortable and dead, or risky and possibly rich.”

He ends the meeting, impolitely asks them to leave, and storms off. It may have been an inappropriate way to handle the client, but Don understood what their audience wanted more than they did.

This may mean taking a leap into uncomfortable or culturally risky territory. It may mean challenging norms to stay ahead of the curve. Those who aren’t afraid to do this, and do it well, can see success.

“Success comes from standing out. Not fitting in.” – Don Draper

He Connected on A Deeper Level With His Audience

Don’s presentations are so captivating and emotionally engaging, they can make a grown man cry.

At the end of the first season in the episode “The Wheel”, Don leads a sales pitch to Kodak on how to market their new slide projector for photographs and slideshows. The executives refer to the new technology as a wheel, but Don has bigger ideas.

He starts the presentation with a story about his first job as a fur salesman, and his boss Teddy. Teddy told him “In Greek, nostalgia literally means ‘the pain from an old wound.’”

He proceeds to flip through a slideshow with pictures of his life with his wife Betty and their two children. His narration a poetic reflection of life, love, and connection, become intertwined in the product and brand, and they are universally understood.

“It’s not called the wheel, it’s called the carousel. It lets us travel the way a child travels. Round and around, back home again, to a place we know we are loved.” A photo of Don and Betty on their wedding night ends the presentation.

By this point, Harry Crane leaves the room crying, viewers tear up, and the Kodak executives are left speechless.

Businesses and business owners are often so focused on the bottom line and sales numbers, they neglect the everyday interactions with their clients. On the web, on the phone, and in-person, never forget that you are communicating with a person. No matter the product or service, an emotional connection to the branding can create the ultimate, lasting impact.

He Was A Rebel

Don Draper was a lady’s man. He stood up to authority. He may have used methamphetamines with the art department to meet a deadline.

It is his unique set of characteristics, life experiences, and often high-risk behaviors that lead to (mostly) great rewards for himself and the firm. He acquires his first job in advertising by tricking Roger Sterling of Sterling Cooper to give him one. He lands the Hershey’s account after sharing an emotional and deeply personal childhood memory during the pitch. Don swings for the fences and rarely misses.

Creative people are often described as restless, bold, curious, independent and imaginative. They tend to form their own set of rules, and then break them. They are high in “openness to experience” as a personality trait that allows them to think of things in a different way, and this is closely linked to creativity.

Every organization should find value in new ideas and the people who have them.

What they often lack is a creative, rebellious, outside-the-box thinker that can turn these ideas into best practices. Thought-provoking ad campaigns. New strategies to differentiate the brand and grow market share. New products and uncharted paths to success. All of this is possible, but the first step is finding that person who pushes your companies unwritten boundaries at every turn.

How To Hire A Don Draper For Your Business

Finding the right creative director or advertising firm to grow your business can be a challenge. Experience, portfolio, and references are all important to consider with any hire. However, sometimes the best candidate has only one, or none of these. They may be more eccentric or unorthodox than anyone you’ve hired before.

To paraphrase the Albert Einstein quote, you can’t solve a problem with the same level of thinking that brought you there in the first place. It is most often the rebellious, artistic, unorthodox candidate that brings new ideas, energy, and massive transformational change to how one markets their business.

Jason McSweeney is an integrated marketing specialist and graphic designer that specializes in brand identity design and creative advertising. In his spare time he enjoys writing and reading blogs. Connect with Jason on LinkedIn.

Guide to the Brand Discovery Process